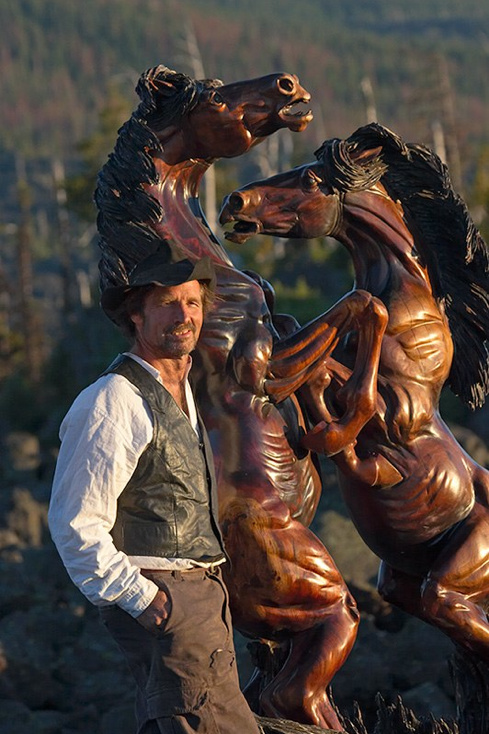 World renowned wood sculptor, J. Chester Armstrong roots run deep in Central Oregon, his chosen home. He was born and raised in Berkeley California and in the 1960's, attended U.C. Berkeley and graduated with a degree in poetic theory and philosophy. In the early 70's, after traveling through Central America and with a brief stay in Vermont he came north to Oregon looking for "untracked space's", where the stars are not drowned out by city lights, and for the past thirty five years has lived outside the little town of Sisters, Oregon. He lives with his wife, singer song writer, Anastacia, in the shadow of the Three Sisters mountains, on 20 acres at the edge of the wilderness...All his inspiration. To quote Chief Seattle, "The further we get from the forest floor, the less human we become." "I would rather live in the middle of nowhere than any city on earth."

Armstrong is a self taught artist with a "can do attitude". He helped run a YMCA camp at Spirit Lake, Washington, before Mt. St. Helen blew, in the early 70s and wanted to introduce the campers to Native American North West totem poles and masks. He couldn't find anyone to teach the class so took on the role of teacher himself and found he had a natural gift for shape and proportions. "I can seekkk the forms in the raw logs. It is like Michelangelo says, Just take away everything that doesn't look like nine horses running." ... And for the last forty years, chainsaws, grinders, and chisels in hand Armstrong has done just that. "I'm hooked on wood sculpture." Out of local Oregon woods, (e.g. Juniper, Maple, Pine, and Walnut) Armstrong carves the world he sees surrounding...Eagles, ospreys, wolves, cougars...coyotes howling at the moon...herons perched majestically at the rivers edge..."the magic of life"..."This is what moves me. This, and the wild herds of mustangs that inhabit the west of my imagination." Armstrong is best known for his horses, thundering herds all moving rhythmically as one. Armstrong's artistic style can be described as, "slightly stylized realism" where the grace and rhythm of the sculptures outline or silhouette takes precedents over anatomical accuracy. Although his horses "look like horses" he says "the art of sculpture is not to recreate the world verbatim but to interpret it." His sculptures are charged with movement and emotion. "I carve to reawaken the soul of the viewer to the primal energy and life force of earth based imagery. My sculptures move in the rhythm of circles, spirals, and flowing lines dictated as much by the grain lines of the wood itself as by my own sense of the harmony of the natural world."

Wood sculpture, like stone sculpture, is a subtractive process. You "take away" to reveal the form within. It is arduous and demanding and combines both artistic inspiration and physical perspiration. It is yielding but not forgiving. It does not allow for mistakes. But wood is organic, warm and "alive" and creates a "one of a kind" unique piece of art that traces it's beginnings back to the living tree blown by the wind and fed by the sun and waters of the earth. Today, more than ever, we need "reverence to the natural world." My wood sculpture is, "the water that quenches that thirst." It is the touching and being touched by the spirit of the Earth. Armstrong's work can be found in galleries throughout the west: Aspen, Vail, Tao's, Santa Fe, Jackson, Park City, Sadona etc.. In churches, most notably the 16ft high Cathedral doors of St. Marys in Boise, Id. and resorts throughout Central Oregon. In Sisters his work can be seen at the High Desert Gallery. Special projects are always welcome. Some of his most notable collectors include Burt Renolds, Clint Eastwood, Olivia Newton John, Nic Nolte, President Bush, Michael Jackson, T.Boone Pickens, Harold Coursen... all friends of mine.